CONTAINS SPOILERS! DON’T READ IF YOU HAVE NOT READ THIRTY NIGHTS.

Ani: (has changed into sweat pants for the occasion) Mrs. Hale, I’m Ani Keating and I’m your son’s creato—ahh…creativity director… yep, that’s me.

Stella Hale: Hello, Ms. Keating, how do you do? … May I ask … where am I exactly? I was just in an airplane, and my husband was telling me to get some sleep, and now I’m here. I have a family emergency, you see, and I have to get to Portland, Oregon, ASAP.

Ani:  Umm… yes, the plane is … refueling. You will be on your way very shortly.  While that happens, this … ah… place is my head. Sort of.

SH: I beg your pardon?

SH:  Ah! Ah, yes, of course. (looks around with bright blue eyes, very much like Aiden’s). How curious a place! What is that thing in the back? Is that a… ballroom?

Ani:  Oh,that! Yes, yes, it is. Here, don’t mind that, Mrs. Hale.  I’m doing a … biography of Aiden. And I’ve seen so much curiosity about his childhood. Would you be willing to answer some questions for me?

SH: Of course, of course. As long as I get back on the plane in the next few minutes. I really need to see my son. (fidgets and wrings her fingers.)

Ani:  (feeling like an emotional leech.) I understand. I’ll get you out of here very soon.  Here, have some Baci chocolates.  They really help.  Now, let’s get started.  What was Aiden’s first word?

SH: (eyes soften and speaks softly.)  Aiden didn’t have a first word. He had a first sentence.

SH:  (nods with a smile).  Yes, he said “Mama,” paused for a just a second and continued “Mama, fank you.” I couldn’t believe my ears. He dropped his little bouncing ball and I gave it back to him, and there it was. “Mama, fank you.”  So I did it again, and again he said it. With a big grin. “Mama, fank you.” I called my husband, Robert, at work in a tizzy. He came home immediately—we spent the whole day just watching Aiden. He was only 13 months old! And the words were almost fully pronounced. (shakes her head. Oh hell, there’s a tear. Yep, there it goes, down her cheek.) We should have known right then that something was different. But the pediatrician kept saying “he’s just a smart boy.”  We had no idea just how advanced his little brain was…

Ani: Are you referring to his eidetic memory?

SH: (looks up startled) You know about that?

SH:  Really? That’s very unusual. Aiden does not share private information. (frowns, purses lips, eyebrow flies in the air and squints her eyes at me.) Are you sure you are his creativity director?

Ani:  Positive. I also do his hair so that means we’re friends. Plus, I’m very nosy. Mrs. Hale, when did you first notice Aiden’s intellectual gifts?

Sni: Well, in retrospect, from the first time he fully opened his eyes. They were almost… too intelligent for a baby. Here, I have a picture, would you like to see it?

AS: (melting into a puddle of raging female hormones) YES, PLEASE!

SH: (pulls out of her bag, not a wallet, but an album, thicker than Brothers Karamazov, full of Aiden baby pictures and sniffles).  Here is my favorite. This is how he watched us from the very beginning. Like he understood it all! Even Doctor Nikos who delivered him said, “smarty eyes! Looks like he’s telling me how to do my job.”

Ani: (can’t talk because she is experiencing an out-of-this-womb moment!)

SH: (looking at the photo.) When he was born, he came so gently. Doctor Nikos said it was almost as if he was worried he would hurt me. It took Robert and me a while to conceive but once I got pregnant, Aiden gave me no trouble… Here are some other ones (starts flipping feverishly through baby pictures). Are you okay, Ms. Keating? You seem choked up?

Ani:  Ah, yes, yes, I have a tearduct allergy. Something about polaroids. Go figure. Mrs. Hale, aside from the intelligent eyes, when was the first sign of his memory?

SH: (looks up from the baby pictures as if she forgot I am here.) Oh! When he was five. One night, I was reading Fantastic Mr. Fox to him.  The next night, I was tucking him in and started to read again but I couldn’t remember the page I’d left off so I picked up a few pages earlier.  Suddenly, he started reading with me! It took all my strength not to scream. I was terrified. I thought he was really reading. But then I covered the words with my hand, and said “Aiden,can you read it now, love?”  So he recited what he remembered from the night before: “Bogis and Bunce and Bean, one fat, one short, one mean, these horrible crooks, so different in looks, were  nonetheless equally mean.” He didn’t know how to read, he just remembered it perfectly (shakes her head again, tearing up, and pulls out more pictures.) Here he is, reading later, on Manzanita Beach. This is how he used to read, roughly two pages or so per minute, which is the speed of an average teenager.

Ani: Was eidetic memory something that ran in your family?

SH: (shrugs.) We don’t really know. My grandfather spoke four languages so there may be a genetic strain but scientists can’t say. I wonder if that’s why—(stops abruptly if she spoke one word too many.)

SH: Well, I was wondering if Aiden worries that the memory would  be passed on to his children. Whether that’s not part of the reason why he has never really talked about having a family?

Ani: (mental note to address with Aiden!) How did Aiden get so wealthy so quickly? A lot of … umm… investors want to know about that.

SH: (breaks into a laugh).  Well, darling, he didn’t exactly get wealthy “quickly.”  See, Aiden started making money when he was six. He started his own business, inventing mnemonic devices. (stands up straight, looking proud)

Ani:  (picks up jaw from the floor again and glues it to her face.) What?

SH: (laughs again).  It’s true. One day, I went to the grocery store but forgot his Honey Nut Cheerios. He was not a happy camper. So he had Robert—who is an architect and engineer–install this contraption in my alarm clock that shuffled song lyrics in sync with our grocery list. That way I would never forget. The first song that played when the alarm went off was “Sugar Pie, Honey Bunch.” I couldn’t believe it. It was the story of being Aiden’s parents: being astounded on a daily basis.  From then on, he started inventing other mnemonic devices. One time, he converted his baseball card statistics into a gambling operation, and showed up at home with all sorts of treasures from baseball bats and toys to candy. We made him return them—he was furious. He kept saying “I worked so hard all day long and no one helps me.” (laughs.) But soon, the private middle schools around Seattle were buying his mnemonic devices. We started patenting them for him, and saving the money. By the time he entered high school, he had about $100,000 in the bank.

Ani: So that’s how he started HH?

SH:  Yes, many years later. We held the money in trust. And I’m glad we did because he’d have blown it all away in his wild years. We just managed it until he returned from Iraq. Then he pulled it out, used it as seed funding for HH, and the rest is history. It helps if you never forget the stock market trends.

Ani: Looking back, would you have done anything different in raising Aiden?

SH:  (looks down). Wouldn’t any parent? Hindsight is twenty-twenty. I would have done a lot of things differently.  A lot…

SH: I would have never let him join the military. Never, ever. I  would have slept outside his bootcamp every night. I would have laid myself in front of that damn plane when he was deployed. I would have gone to Afghanistan. To Iraq. Carry all that gear for him. All those guns. Have him sleep on me rather than on cold desert. Have my arms around him instead of bullet rounds. Enlist myself if they would let me, take his place.  It really should be a law that mothers be allowed to take their children’s place in war. We would all do it.  All of us … (wipes her eyes, straightens her camel-colored cardigan and looks up.)  My apologies, Ms. Keating… do you have any other questions? I really must get back to my son.

Ani: Not for now, Mrs. Hale, thank you so much for your time. I see they have refueled the plane, and you’re ready to go.  I’m sure we will see more of each other.

Ani: Ah, don’t worry about that Mrs. Hale. That girl is a dream.  Have a safe flight.

SH: You too, Ms. Keating.  And please, darling, I know you are a creative and all, but sweat pants??

Winner AnnouncementDecember 22nd, 2015
The Winner of the Giveaway is NATALIE MCNICHOLS! Congratulations Natalie, and thank you everyone for participating! 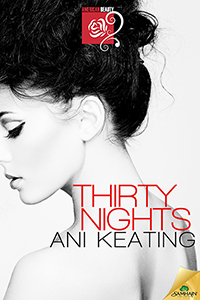 Thirty Nights © 2013 Ani Keating (formerly Ani Surnois) Ninety Days © 2013 Ani Keating (formerly Ani Surnois) Unauthorized use and/or duplication of this material without express and written permission from this blog’s author and/or owner is strictly prohibited. Excerpts and links may not be used without the express written permission of author. For permission, contact stacy@reasonmanagement.com
%d bloggers like this: